InShort Film Festival 2014 Grand Prix Director Christopher Bevan tells us how his winning film “Love & Other Chairs” came about, what it was like to be a part of InShort Film Festival 2014 and why diverse collaborations matter to him. The script written by Luke Kondor, who was inspired by films like Being John Malkovich, takes this dramatic and often dark theme in a surprisingly surreal way, when we see the main character’s (Julian) girlfriend (and then wife) unexpectedly turn into a chair. In this brilliant heartfelt dramatic comedy, directed by Christopher Bevan, you suddenly find yourself reacting to the personality of solid unmovable chairs. As time passes, and Julian tries to move on to new relationships, new chairs pile up in his home materialising the void of many ended relationships.
This independent short film started to come into life when Christopher was put before Luke’s script after sometime looking for the right thing to film. A bit later, a crowdfunding campaign started to run. With the help of the team, friends and family, the film was completed last May in little more than one year. Here is a short interview where director tells us a bit more about the film and his creative collaborations based on diversity.
InShortFF: It was a fairly short time to complete a fully independent film project. Tell us a bit about you and what you expect of Love & Other Chairs after winning the InShort 2014 Grand Prix?
Christopher Bevan: I’m based in Derby and I work as a freelance director whilst also running my own production company YSP Media, and this project was something that I was able to bring a great cast and crew together for as people seemed to really take to the concept.
So far we’ve had only a handful of screenings but we’ve got quite a few more coming up, and I’m hopeful that we’ll have some success with other festivals we’ve been applying to as well. It’s just nice to be able to get this quirky little film in front of audiences, hopefully make them laugh and maybe take something away from it at the end!

ISFF: What kind of difference did it make to have a diverse team when making Love & Other Chairs?
CB: It was a real privilege to have such a diverse team and we were fortunate to work with so many people who brought tremendous passion, experience and fun to the project. I’d studied with many of the crew a few years earlier, but many were filmmakers I’d met on other projects or heard great things about. We filmed over three days in March 2013 and completed the film eventually in May 2014 after a lengthy post-production period and during that time our cast and crew gave their everything and supported us every step of the way. I count all of our crowdfunding backers as part of the team too as they helped us make it happen, and we had some amazing contributions from all over the world!

ISFF: What did it mean winning the main award in the international festival dedicated to celebrating diversity?
CB: InShort was one of the first film festivals we submitted to and my main hope was that our film would be seen by a wider audience, and that it would receive a good response! We’d had some positive test screenings up to that point, but we were very curious to see if the film would translate to an international audience. I hoped that we would be selected and was delighted when the news came through that we’d made the final shortlist! To actually win the main award of the festival was an amazing surprise and extra special because of the fact that it went down well with a diverse and international crowd.

ISFF: Would you recommend collaborating internationally to other filmmakers? Why?
CB: I definitely would recommend it, you work with the best people and fortunately the film industry is full of talented and amazing individuals from all around the world. Here in Derby and the East Midlands in general we have a great filmmaking scene and from what I can see there’s a growing number of international filmmakers living and working from here, which is brilliant.

ISFF: What is coming next for you and Love & Other Chairs?
CB: Following on from the InShort Film Festival we have at least five further screenings all around the country, and again it’s great to be able to have the film seen by a wider audience. The story and narrative structure was always a risky bet when we began developing the film and I think we’re starting to see that it’s paid off as people are responding well to it. You’re never going to be able to please everyone of course, but hearing an audience laughing and enjoying themselves whilst watching it is a good feeling. That we’ve got chance to have more of those moments makes it all worthwhile! 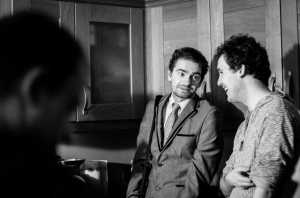 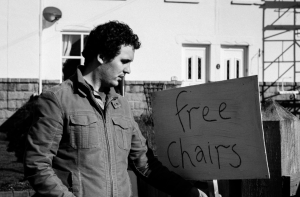 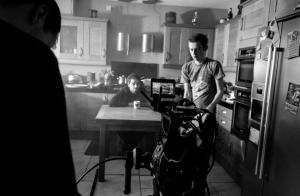 InShortFF’s 2014 Public Award winner is yet another good example of a successful international collaboration. When Anna Mantzaris and Eirik Grønmo Bjørnsen were studying film in Volda, Norway, they realised they were inspired by the same films, illustrations and visuals. But Milk is Important is their first collaboration, filmed in the same city where they met. Though the music and sound design was created in Stockholm and Cardiff. They met composer Phillip Brookes and sound designer André Parklind during exchange trips and they certainly didn’t shy away in bringing creativity from all over. We can only imagine what kind of emails they must have written trying to put into words what they imagined musically for the film, but we know that the result has been amazing and that it has touched the hearts of our audiences ever since.
But Milk is Important is about a lonely man overcoming the fears that isolate him from social life. As if speaking to the woman next door wasn’t frightful enough, a monster creature starts appearing to him exactly at those crucial moments when he is surrounded by the scariest of beings: people. He quickly realises that the monster is, in fact, the helper who will take him on a transformational journey.
Heart-warming and fun, this animation has collected loads of fans during our festival and internationally. Anna is now based in Stockholm and Eirik in Oslo, but they are still working together, thinking and working collaboratively and internationally, and have given us this lovely interview.

InShort Film Festival: Tell us a bit about how the film came about.
Anna and Eirik: We are fascinated by the fact that some people live their whole lives so isolated from the rest of the world, so anonymous. This can become especially clear in apartment blocks, where people live so close and yet they are strangers, some even avoiding each other. We wanted to do something that people could relate to, something that stayed with the audience after the film. But we also wanted to add a bit of humor and heart to it, so it wouldn’t be too heavy to watch. Even though it could seem that much of the story is about milk, it’s about a man overcoming fear. We wanted to use this heavy subject in a warmer and lighter way. Bringing in the creature as the annoying helper was our choice to make the story original and more charming.

ISFF: What kind of difference did it make to have a diverse team when making But Milk Is Important?
Anna and Eirik: While travelling and being on exchange we met so many talented people. So when we started up with our bachelor project we saw a great chance to keep in touch by bringing them into the production. Having a diverse team really made our film much richer. Without the people we worked with the movie would never have been the same, so a huge thanks to them!

ISFF: What did it mean winning the public award in an international festival dedicated to celebrating diversity?
Anna and Eirik: We liked the festival’s theme of diversity, and that is why wanted to submit. While working on the film there are times when you doubt the project and wonder if people will understand and like it. So receiving the audience award was really warming and motivating! It is really satisfying that the film works internationally, that people from all over can relate to the theme and story, and that its not bounded to a certain nationality.

ISFF: Would you recommend collaborating internationally to other filmmakers? Why?
Anna and Eirik: Yes, definitely! Collaborating internationally is a great way to expand your network both socially and professionally. You get to know people who do same type of work and can share both knowledge and inspiration. Working through crossed borders is also very inspiring because animation from different countries tends to have different styles. And cooperating can yield a richer result.

ISFF: What is coming next for you and But Milk Is Important?
Anna and Eirik: At the moment we are finishing up a commissioned project. It’s about equality, diversity and anti-discrimination. We have also started talking about ideas for a new short.

But Milk Is Important Trailer from Anna Mantzaris on Vimeo.